Loss of Control In flight – Inside pilot training 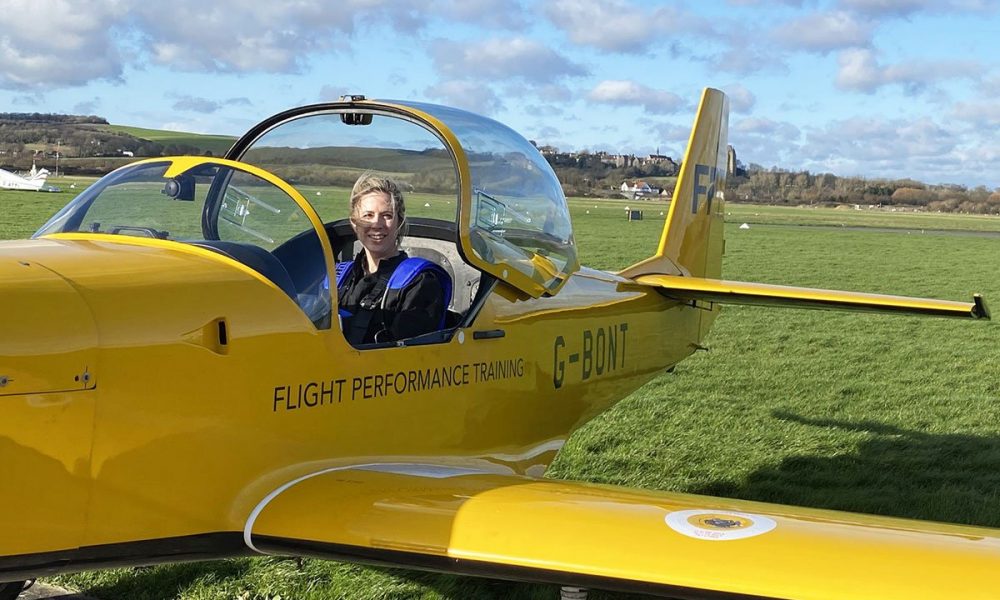 A report of a day spent with us by Louise Rose Jones.

Loss of Control In flight (LOC-I) is the biggest single cause of air accidents, yet in 80% of cases the aircraft was still flyable. What’s being done to address this?

It’s widely known that flying is the safest way to travel. Safety is the top priority across the aviation industry, but catastrophic events do happen. Thankfully the loss of an aircraft is extremely rare, but when it does take place it’s a shocking reminder that nothing can ever be 100% risk averse. Out of tragedy often comes learnings. The Air France flight 447 and Colgan Air flight 3407 crashes were no exception. By coincidence, both accidents took place in 2009, and like most air accidents involved a complex set of events. There was one major similarity. Both aircraft experienced Loss of Control In flight (LOC-I), resulting in a stall that the pilots didn’t recover from.

The accidents sent shockwaves across the world and placed the magnifying lens on pilot training for LOC-I.

I spent the day with Captain Tony Brackston at Flight Performance Training to learn about Upset Prevention & Recovery Training (UPRT), and recent updates for trainee pilots under European Union Aviation Safety Agency (EASA) regulations to help them enhance the Attitude, Skill and Knowledge (A.S.K) needed to successfully recover an aircraft that loses control. Tony and team are all actively flying in addition to their training pilot roles. Their current positions range from commercial, business, military and test pilots. Here, we begin by reflecting on the harrowing accidents of 2009, followed by what UPRT actually is. 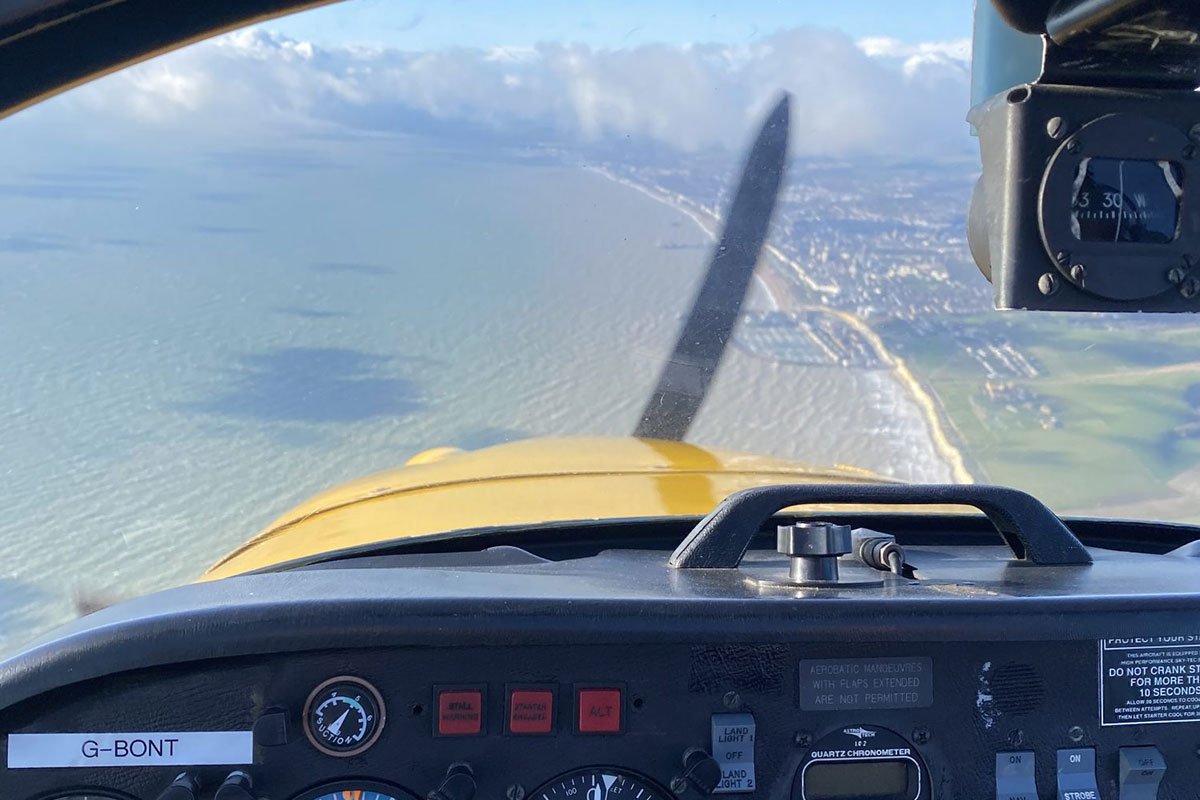 The circumstances surrounding each flight were different. The Air France flight was operated by an A330 and was at high altitude in the cruise after taking off from Rio De Janeiro, Brazil (‘cruise’ is the phase of flight where an aircraft has levelled off at the altitude it will maintain until it’s time to descend for landing). Colgan Air was making its descent to land into Buffalo, New York. The common factor between the flights is that they both went into a stall that was recoverable, but that recovery wasn’t made.

What is a stall?

A stall occurs when the aircraft exceeds its critical angle of attack and is no longer able to produce the required airflow over and under the wing to produce the lift needed for normal flight.This video shows what happens. When flying an aeroplane, a stall has nothing to do with the engine or another mechanical part. A stall doesn’t mean the engine has cut out, and can happen at any altitude and any speed.

UPRT equips pilots with the skills and knowledge needed to effectively recover from a stall and potential loss of control that might follow.

This has always been taught in a flight simulator where pilots experience flying at unnatural angles that induce stalling, and all pilots know how to recover from a stall. This is usually taught at one g (gravitational force) either in level flight (wings level) or at a banked attitude. The reality is that a stall very rarely happens in one g flight.

As of December 2019, European Union Aviation Safety Agency (EASA) made it a legal requirement that all new pilots in training must carry out UPRT in a real aircraft. This applies to pilots across all fields of aviation, including commercial and business aviation. Existing pilots will continue to undergo UPRT during their simulator training.

Why is it now mandatory for UPRT to take place in a real aeroplane for EASA regulated countries?

Flight simulators are highly advanced pieces of kit, and cost millions. In fact, the sim flight deck is identical to it’s flying counterpart. One broken button can cost thousands to fix. However, a simulator can’t simulate the true physiological, physical and psychological experience of stalling and loss of control that would be felt in reality.

Flight training is constantly evolving and enhancing based on the latest learnings from accidents, incidents and general advances in knowledge and technology. This latest mandate is a prime example.

The ‘Flight Envelope’ is a description of the capabilities of aircraft design in terms of airspeed and load factor. During normal flying operations (your average flight from London to Spain), aircraft operate within just 5% of the flight envelope. As a passenger, you experience this as the standard turns left and right, climbing and descending down to take-off.

Loss of control can take an aircraft well into the remaining 95% – a realm that most pilots aren’t used to operating within. Experiencing UPRT in the air has the benefit of giving pilots exposure to 100% of the flight envelope, and the skills needed to get their aircraft back into the safe and familiar 5%.

What could cause an aircraft to lose control?

There are many factors that could lead to loss of control, and they fall into the following categories: Human factors, machine, and environment. Environmental factors could include weather conditions or wake turbulence (the disturbance in air flow caused by other aircraft), while ‘machine’ related factors could be an aircraft system malfunction. Human factors may include fatigue, or not taking the correct action. 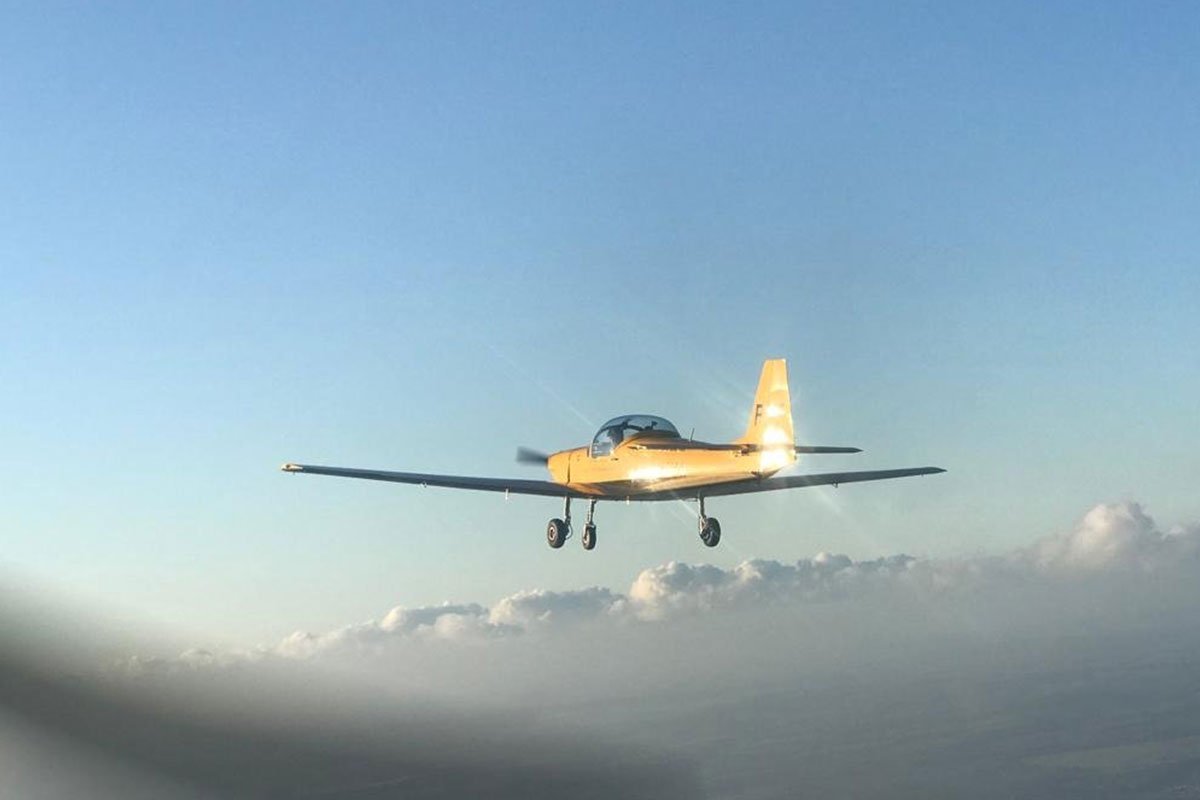 What action could recover a stall?

The main action needed to recover from a stall is to get the air flowing back over and under the wings to generate the lift needed for flight. This means reducing the angle of attack (the angle the wings are pitched at) and requires the pilot to point the aircraft in a ‘nose down’ position to pick up the speed needed to achieve this. Once this is achieved, the priority is ensuring the wings are level, the engine power is adjusted accordingly, and normal flight is stabilised.

For a long time the focus was to recover from a stall with minimum height loss. This remains as important as ever, especially when flying at lower levels. However, pilots spend most of their time above 30,000 feet. The higher you’re flying the thinner the air is (less oxygen), which means an aircraft will responds differently if it stalls. It can take over 5000 ft of height loss to recover from a stall at altitude, which means the training emphasis shifts from minimum height loss to using the best technique for stalling at height. UPRT is as much about stalling at high speeds as stalling a low speeds.

There’s no technical fix for loss of control

A major cause of air crashes used to be Controlled Flight into Terrain (CFIT) accidents. A CFIT accident occurs when a properly functioning aeroplane under the control of a fully qualified and certified crew is flown into terrain, water or obstacles with no apparent awareness on the part of the crew. As a result, the Ground Proximity Warning System (GPWS) was designed to alert crew that they were in imminent proximity to terrain.

There is no such technical fix for loss of control of an aircraft. Take wake turbulence for example. This can happen unexpectedly. If an aircraft is heading into a stall, stall warnings will appear, but the only method of recovery is through pilots ‘hand’ flying the aircraft. Autopilot is a mean feat of technology but in this instance, only pure human interaction with the aircraft will do the trick.

Pilots are highly trained professionals who must complete training every six months to stay up to date and in ‘in check’. Despite this thorough training, there is a very small chance of what’s known as a ‘black swan’ event. This is when a situation arises that might not have been encountered before. This could include an aircraft losing control because of a factor never seen before. This is another reason why experiencing UPRT in the air makes sense.

The team at Flight Performance Training conduct UPRT courses in a Slingsby T67 Firefly. This is the perfect ‘blank canvas’ flying classroom. Whether pilots are used to flying an Airbus A380 or Gulfstream 550, they can learn and enhance their skills in this two-seat aerobatic training aeroplane. The Firefly has the benefit of its aerobatic ability, while not being at the high end of aerobatic ability, meaning that it can be manoeuvred to emulate an element of the ‘sluggishness’ that might be felt by a pilot experiencing extreme flying angles in their usual larger, and non-aerobatic aircraft types.

It was fascinating to discover that NASA research shows that in an event such as loss of control of an aircraft, the pilot in command has ten seconds to address a situation in the correct way to maximise the chances of recovery.

A fundamental feature of training at Flight Performance Training is putting human factor to the top of the check list for recovery of loss of control. Loss of control could startle the most calm and collected of pilots, resulting in a knee-jerk ‘fight or flight’ adrenaline fuelled reaction.

It would be all too easy for pilots to point the aircraft nose up in an attempt to gain speed, to overcome a stall, when the nose actually needs to point down. At Flight Performance Limited, pilots are taught to ‘stop’ for one breath before taking action. This gives them that all-important moment to re-set from shock to logical thinking and lower the nose.

As a communications professional, I’m forever emphasising the importance of communication to my colleagues and stakeholders. If there was ever an example of simple clear communication, and how vital it is, Tony and teams’ UPRT training courses are it.

I’m not a pilot, but Tony explained the background and theory of UPRT in a way that made total sense to me. I even had a go at carrying out the actions when we were up at 3,000 feet and survived to tell the tale!

An out of this world experience

Aside from the very serious reasons behind our briefing and flight, my first taste of aerobatic flight was one of the best experiences I’ve ever been lucky enough to have. It took me two days to come back down from the clouds! Flying in a canopied cockpit is like nothing else, and aerobatics, including a barrel roll, felt like dancing in the sky.

Prior to reaching the aircraft we fitted our parachutes and Tony ran through the pre-flight safety briefing to ensure I knew how to exit the aircraft and use the parachute if needed.

We headed out to the beautiful Firefly where Tony performed pre-flight checks before taxiing to the runway at Brighton City Airport in Shoreham, Sussex. A few minutes later, and with Air Traffic Control clearance, we were up and away, flying west of the airfield towards Brighton.

Tony found a nice blue pocket of sky amongst the clouds just off the Brighton coast, and that’s where I got the chance to experience UPRT in practice. We warmed up to a barrel roll with a few g-force inducing manoeuvres, eventually experiencing 3 g’s. Having never experienced this before, I was slightly apprehensive. It felt like extra force on your body, similar to what you might experience on a rollercoaster, but to a higher degree. Interestingly, I found the transitions back to normal flying the oddest sensation. Tony gave great advice to keep my eyes focused outside of the cockpit as much as possible, which helped.

Thank you to the team at Flight Performance Training, including Captain Tony Brackston, Captain Adrian Read, and Flight Operations Director, Carolin Read. The team’s passion for aviation safety shines through, and it was an honour to spend time with Tony to learn more about UPRT. 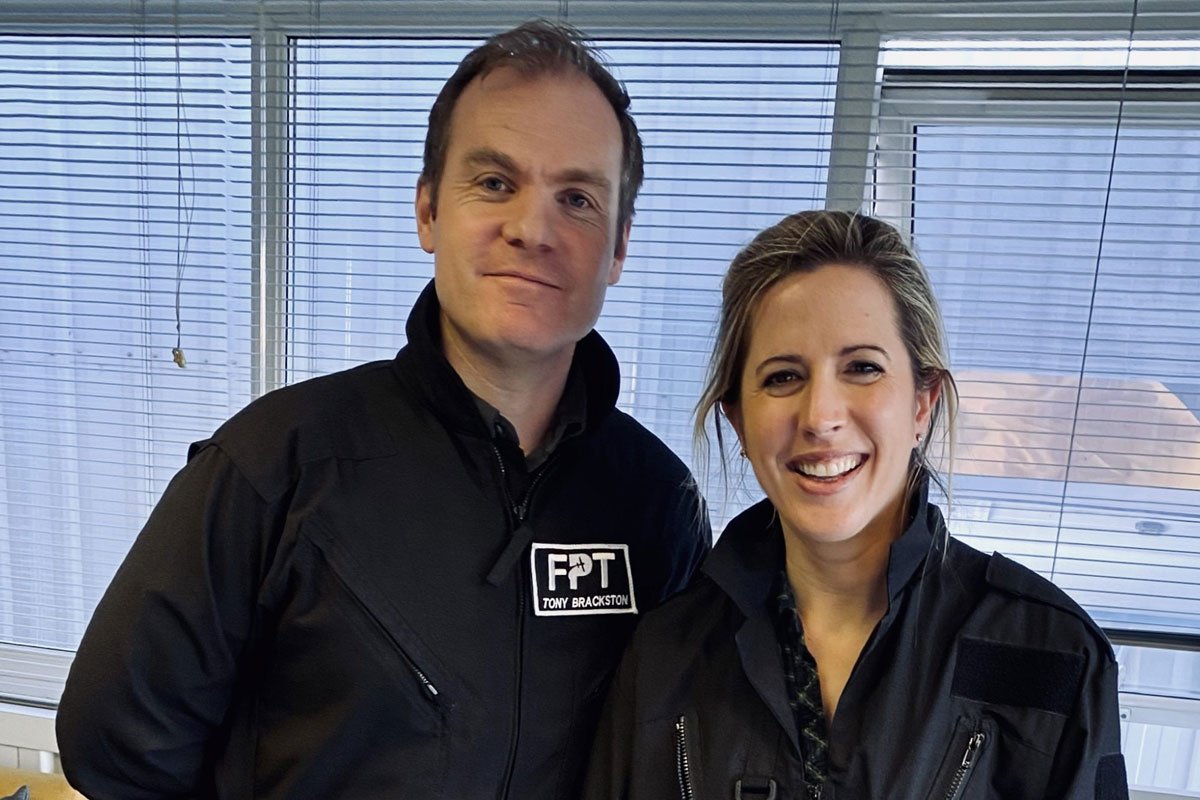 The UK CAA have now released guidance for the extension of validity and other time periods for EASA licences, ratings, privileges, endorsements and certificates of…

Flight Performance Training specialises in the delivery of UPRT courses, providing academic and on aircraft solutions for pilots at all stages of their career.